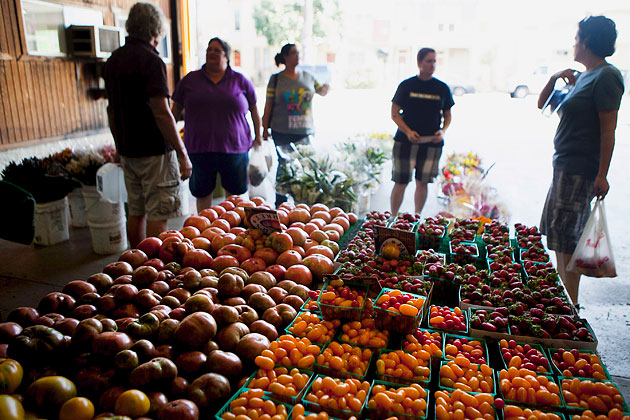 On Wednesday nights, Benzi Ronen hosts a farmers market in his Brooklyn apartment building. He takes deliveries of fresh fruit, vegetables, and eggs from local farms and distributes prepacked bags to 10 of his neighbors, who have ordered online. In August, juicy stone fruit and berries are particularly ripe. “The harvest is at its peak right now,” Ronen says.

The 42-year-old entrepreneur hopes thousands of others will soon be hosting similar events using Farmigo. That’s the 22-employee company that Ronen, a former product manager at SAP (SAP), co-founded four years ago to make software for community-supported agriculture (CSA) groups, in which people sign up to buy a share of a farmer’s harvest delivered every week or two.

Over the weekend, Farmigo quietly relaunched its website to enable customers to set up what Ronen calls “people powered farmers markets.” His approach tackles a paradox of our food-obsessed culture: People want fresh, local food straight from farms and the convenience of shopping at a grocery store.

STORY: The Sofi Awards, the Oscars of Artisanal Foods

A handful of other startups, including Good Eggs and Relay Foods, offer farm-to-consumer sales online. The U.S. Department of Agriculture, which is encouraging Americans to eat local food, is “watching this tech sector develop with great interest,” says Arthur Neal of the agency’s agricultural marketing service. The entrepreneurs “behind these products are making the local food chain—from farmers to processors to distributors to buyers—more efficient and more accessible for consumers,” he wrote in an e-mailed statement.

More than 3,500 CSAs use Farmigo’s software, but Ronen recognized that a lot of people want fresh food from farms without committing to a season-long CSA subscription. In a traditional CSA, members pay a lump sum for a share and can’t pick and choose their produce. (Says Ronen: “Sometimes you get a lot of kale.”) Think of Farmigo’s new do-it-yourself markets as smaller, more flexible CSAs that anyone who meets Farmigo’s criteria can set up.

By brokering sales between farms and consumers directly, Farmigo eliminates the retailer’s markup, which Ronen says is normally 40 percent or 50 percent. That means the company can pay farmers more, give the market host a cut, and keep prices similar to those at grocery stores. Ronen says the share that Farmigo takes varies from site to site, and he wouldn’t disclose the details. The company, headquartered in Brooklyn, has raised $10 million in venture capital from investors, including Benchmark Capital and Sherbrooke Capital. The site has helped CSAs process tens of millions of dollars of orders, he says.

VIDEO: Is Pot Coming to a Farmers Market Near You?

Hosts, which Farmigo calls “champions,” invite people to join and find a space to distribute the food. Members order online from crops listed by farms in their region. Unlike in most CSAs, Farmigo lets shoppers choose from several farms and vary their orders from week to week. The farmers harvest and pack the food, and Farmigo hires local drivers to deliver it. The market hosts get to keep 10 percent of whatever’s sold, as long as the orders total at least $600.

The first handful of the DIY markets began this year around New York and the San Francisco Bay Area. Ronen envisions thousands or tens of thousands of such “food communities” five years from now. They’ll be in people’s buildings and backyards, run by PTAs as school fundraisers, offered by yoga studios and employers, he says. If Ronen’s own building is a good gauge, plenty of people are ready to sign up. He knows most of his neighbors now, and, Ronen says, “we’re even thinking of doing a harvest party in the backyard.”