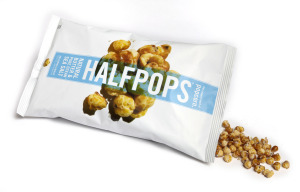 Half-popped popcorn is exactly what it sounds like: popcorn kernels that, in the process of popping, never quite made it into the fluffy white stuff found in movie theatres and microwave popcorn bags. It is the stuff at the bottom of the bag.

“You get a crunch as well as the pop to it,” Mr. Giannuzzi said. “This company is the first to market with a half-popped kernel and we really think it’s disruptive to the [salty snack] category.”

Halfpops comes in two flavors–butter and sea salt as well as white cheddar–and are primarily available in the Pacific Northwest. The Woodinville, Wash., company, founded in 2011, plans to move toward national distribution with the help of Sherbrooke’s investment, Mr. Giannuzzi said.

Sherbrooke has made several investments in the snack sector before. The firm invested in tortilla chip maker Food Should Taste Good in 2007 and later sold it to General MillsInc.GIS -0.39% in February 2012. The firm made an investment in Angie’s Kettle Corn in May 2011, and co-led a $14 million investment in New York-based Ciao Bella Gelatoalong with Encore Consumer Capital.

“Their track record was pretty impressive, which was one of the reasons we were attracted to them,” said Mike Fitzgerald, chief executive officer of Halfpops.

Mr. Fitzgerald said Sherbrooke initially approached them about an investment “when we were really small,” and have kept in touch over the years.

Another element that attracted Sherbrooke to Halfpops was the fact that the company owns a patent on the manufacturing process of making half-popped popcorn.

Mr. Giannuzzi declined to give a specific amount that Sherbrooke invested in Halfpops, but said it was “several million dollars.” The Newton Lower Falls, Mass., firm targets companies with $5 million to $25 million in annual revenue, investing up to $10 million in a given company.

Sherbrooke invested in Halfpops through Sherbrooke Capital Health and Wellness II LP, which closed in 2008. Mr. Giannuzzi said the firm still had enough dry powder to do “three to four” new investments and has plans to raise a third fund, but didn’t give a specific time line.